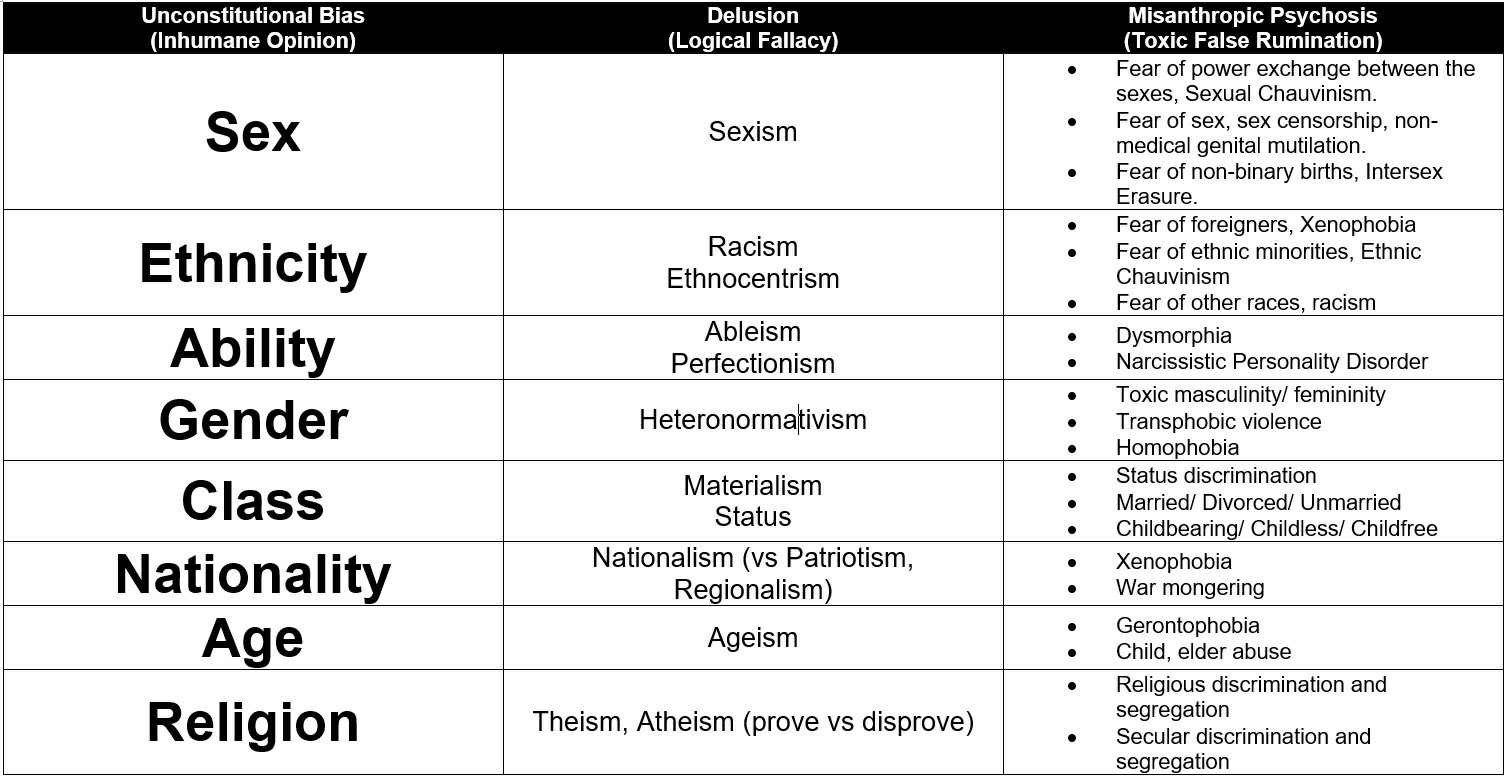 ABSTRACT
In sexual politics, men and women have often excessively relied upon gender–a social construct of mannerist aesthetics generally composed of a spectrum spanning from masculinity, neutrality and femininity–to define human capacities, social privileges and stigmas, and even physical ability at a sexual physiological level beyond those physiologically systemic such as chromosome and maturation. The paper investigates: The unacknowledged sexes: Intersexes; Government perpetuated work division by sex and reproduction–not by talent, culture or capacity; Comprehension of gender and level of education and class; Overemphasis and monolithizaion of gender, and the body modification to adapt to it (genital mutilation, cross dressing, synonymization of beauty and femininity, Caitlyn Jenner and her irreversible XY chromosomes); Feminism and masculinism’s common foe: Misanthropy.

Considering from a natural standpoint, females of a species are dominant. Insect colonies are populated largely by female drones. Female birds are courted in large numbers, ye have the discretion on just who’ll fertilize their eggs. Female seahorses pass gestational duties onto males. Even some species of reptile have reduced males into just being cells they produce themselves when desired.

Shane, C. “The Meme-ification of Misandry” (2015) Matter (Aug 5) Medium.com. https://medium.com/matter/the-meme-ification-of-misandry-3b0c95ad51f5#.4kkqv6mq8
“It’s true there’s no institutionalized violence against all men due to their gender, and women as a group aren’t regarded as a threat to their physical well being. But women of color have repeatedly pointed out that “kill all men” takes on a grotesque dimension when put in the context of our country’s racial reality. Black feminist Zoé Samudzi agrees that “misandry — like reverse racism — isn’t possible,” but “‘kill all men’ — even in jest — is a reminder of the historical role white women play in white masculine violence against men of color.” Black men are targets of institutional violence — a truth that’s acutely impossible to ignore in light of the rampant police murders of black Americans. And when Dylan Roof murdered nine black church congregants in South Carolina, reportedly attributing his brutality to “you rape our women,” white women’s tacit and active participation in white supremacy was brought even further to the fore/ “Ariel Lebeau, a biracial cis woman, subscribed to misandry when she first encountered it online, but became increasingly critical of the limited thinking it belied: “Adopting cavalier misandry as part of your feminism strikes me as a disregard for the intersectionality of race, gender, sexuality and class.” White feminists have such a poor track record of intersectional activism, it’s no wonder women of color don’t trust them to be sensitive in their casual comedy. “My people, families, friends of families, and so on, are already dying,” says Soha Kareem, a queer Palestinian-Iraqi woman. “It’s a joke that I can no longer support because I see death happen everywhere, with whiteness centered and protected.”

“But inherent in this word “misandry” is hatred. And inherent in phrases like “ban men” and “male tears” are cruelty and violence. If a man wore a tee shirt that said “misogynist,” even if he were a dyed-in-the-wool feminist, wearing it tongue-in-cheek, it would not be funny. It would be misguided.

“We are all familiar with misogyny: the hatred of women. This has been well-researched for decades. We are less familiar with misandry: the hatred of men, or more broadly, the hatred, fear, anger and contempt of men. It is worth some consideration, especially since misandry is by no means restricted to women. Indeed some of the most male-negative people out there are men./ “To conclude: misandry is everywhere, culturally acceptable, even normative, largely invisible, taught directly and indirectly by men and women, blind to reality, very damaging and dangerous to men and women in different ways and de-humanizing. This post is to help make it visible and to deal with it – as we have dealt with, or tried to deal with, misogyny, racism and homophobia.